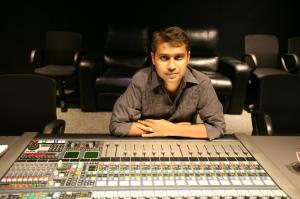 Inkaar as a film, has a lot of prominence to dialogues. The location recording by Jayadevan Chakkadath is very very good. There are very few places where we needed to clean the dialogues or redub. Infact around 90% of this film is location sound. That being said, I wanted to try a completely different approach to the mix and design of this film.

The first thing I decided was to have the 3 elements ie. Dialogue, Music and Effects in 3 different spaces. What I did was to try and space the Background score as if it were behind the speaker, with some depth. The Dialogue was then balanced to be on the plane of the speakers and the ambience (Of which this movie has a lot of prominence) to be inside the surround space. So, we are encountered with 3 stages of the elements.

The advantage I realized in doing this was that the ride of the music against dialogue can be completely utilized for emotional purposes yet maintaining the space for the dialogues. So, when we have intercuts with the characters delivering different versions of the same content, the music can be used as a support or a counter with the same piece but psychologically different because of the relative levels. This also gives me a window to take the audience away and shift their attention to what the director requires by manipulating the background score’s depth. So, there are instances where the single piece of background music for a character or emotion morphs into a music from a laptop or party. And they aren’t different music pieces in the laptop or party, but a specialization of the background score itself. (This is an extension of an idea I got while mixing a reel of Gangs of Wasseypur. I put a reverb on the master output of the background score and the scenes were balanced against the dialogues using ONLY the wet/dry parameter of the reverb and eq and compression. In fact the master BGM fader moves by no more than 2 dB the most! Why I did this, I don’t know, just wanted to try achieving something in a different method. This turned out to be much more tougher than I thought because of the difficulty in maintaining the balance of the music piece with these manipulations. But I was happy and so was everybody! )

The ambience in this film (Tracklayed by Deep Bawa) is done in such a way that it gives freedom for a lot of manipulation. Mostly it is very textured sounds like traffic, roomtones, winds etc. The advantage of this is that it becomes very easy to process and alter these to make it completely tonal and surreal based on how the dialogues are delivered, the emotion conveyed, how the camera treats the characters, and then back to normal as the director wants the audience to perceive. There is a sequence where as the characters are conversing in an exterior scene, the camera starts to track around them. We took the whole ambience layer and turned it around the space matching the positional reference of the location, but maintaining sounds in speakers. (Basically, the speakers were not left empty while doing this.) It suddenly gives a lot of movement and dynamics to the scene because then there were things on screen that we hadn’t seen before coming into focus and fading away, all while keeping the grip on dialogues intact. (Imagine scenes like this in Atmos!!)

Another idea I had was in handling flashbacks. Rather than just adding reverb or delay to the dialogues, I did something else. I took all the sounds in the scene (Except Foley) and played them in reverse while keeping the dialogue straight. This has a very surreal effect and since these were very tonal sounds added to elements like office ambience, phone rings etc (all reversed), they heighten the intention. My reason was that we are forced to listen and follow the dialogues that go linear while all our surroundings are reversed. So, in a way we are forced into an intense situation mentally, while that is what the scene is too. This is one method I did through the film where (I hope!) I was able to bring the intensity of the scene through sounds.

I didn’t want to do a lot of stuff in this movie because the performances were really good and in the end, it was all about the director telling a story and the gist being how I can highlight the experience. The film has a lot of subtle designs like these speckled throughout. Working with Sudhir Mishra is really amazing because I got to learn a lot about how a film maker sees emotions in his films. My art only improved working with him because he connects to the film on a completely emotional scale and I have to understand and deliver what he wants by working an manipulating the elements with me technically and artistically. This really pushes the boundaries of me as a mix engineer and sound designer because I have to be minimalistic and at the same time unveil a story taking the audience along. There were instances earlier (mistakes actually) that I had made years ago when I was learning my craft, where I would start manipulating sounds and layering stuff looking at the beauty of the scene, but not the film as a whole. It is experiences like these that teach you that in the end, the audience wants to experience a film and not a scene. It took me years not to understand the point, but to find out how to implement it. It becomes very difficult for a mix engineer especially, because we sometimes jump very radically between films. (I did Rowdy Rathore in the day and Gangs of Wasseypur 2 at night for 10 days!!). It becomes very difficult to emotionally shift our mind to the different movies. But there is nothing that can beat experience. And the more experience one gathers, the more easy it becomes to adapt and deliver on a creative level, maintaining the emotional value of the film.

Nothing is complete for a mix engineer without his amazing assistants. They are the pillars that hold him / her. Rajiv Divakaran and Sharon Kalan Johny have been amazing on this project. This film has two mix engineers and for the first time I have worked with Juztin Jose who is the film mixer along with me on this project. A very talented engineer and fun to work with. He is handling the climax reels.